What goes up must come down...

Once again the heading of this entry was supposed to read “Townsville to Bundaberg”. But our run of good luck had run out some time last night until it seemed that the further down the coat we went, the worse things got. Having said our goodbyes to our kind and Valiant saviours we set off for the second to last leg of the journey with the intention of pushing on through past Bowen to our very first stopover Bagara Beach in Bundaberg as we had planned to do after Bowen anyway. It was as easy as making up the 200km difference between Townsville and Bowen and we would be still on schedule to arrive back in Maleny on Wednesday as planned. From Bargara beach it is only around three hours to home, so it would be nice to wake up on that lovely beach one last time and have a relatively cruisy ride home.

About ten minutes down the highway and just after the turnoff from Townsville to Ayr and “BOOM! CRASH! SMASH!” – A large semi-trailer truck whizzed past us and the side windows towards the front of my caravan literally exploded out sideways. I pulled over as soon as I could. There was no way we could risk driving the 1,000kms home with two missing windows. With no other options available, I embarrassedly phoned Shane and Melissa again. They said of we drove back to their place they would ply up the windows for us as Melissa is a cabinet and kitchen maker. So we did, and they did, but I really felt we were pushing the very new friendship by this point, and I think they probably did too. More copious thanks and praise and we set off once again. Determined to make up for lost time, I stocked up on the energy drinks with the intention of driving the crazy 1100kms and drive most of the night to get to Bargara as originally planned for that day. 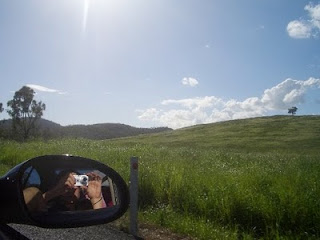 From there it was straight past Mackay and through Sarina and into the “badlands” that long, long stretch of nothingness that is the Mackay to Rockhampton stretch. No houses, no mobile phone reception, no petrol stations, no nothing. Just 350 kilometres of absolute desolation. I had filled up just before Mackay, so I expected that we should have enough to get us through to Rockie. I was wrong. Things started to get precariously low at around 9pm one hundred kilometres from Rockie in a place in the middle of nowhere called Malborough so when a truck stop and petrol station finally loomed ahead I gladly pulled over. 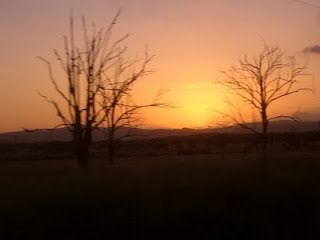 It was then that I noticed that we were once again missing a window. The ply Mel had screwed in had come lose and this time it had taken the whole aluminium window frame with it. The truckies warned me against driving on without a window. Bas was not keen to stay at this wild desolate place and I must admit I wasn’t feeling super secure about it either, but at least a couple of truckies had stories to tell of exploding caravans who had literally disintegrated before their eyes on the highway because a bit of air had got into the vans. Not willing to risk that possibility I took up the truck stop owner’s offer to park the van around the back for the night with the promise that he would ply it back up for us first thing in the morning.

I cried myself to sleep that night – a truck stop in the badlands was not the beach stop in Bargara I had hoped for and I wondered what else could possibly go wrong.