A day in Byron Bay keeps the blues away

So I realise that I’ve left the story dangling somewhat... but the best of Byron Bay became apparent as the sun came up on the aptly named First Sun Caravan park the next morning. 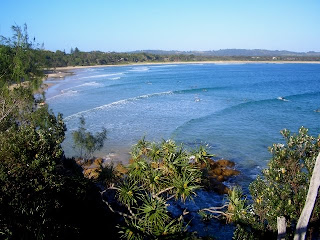 During the night it had poured down rain and I got up at some point to wind the hatch down on the caravan. I was hoping that the rain wouldn’t stick around as I had hoped to get about and take some photos of the lighthouse before heading back home.
I awoke, as I always seem to do on the road, at sunrise. A quick peek out the window of my cosy new caravan-abode revealed sunny skies. Yay! So I snuck out quietly and left Trent sleeping grabbed the camera and took the back gate onto the beach to catch those first rays of yet another new day. And what a beach! The perfect semi-circle of the distinctive bay stretches out as far as the eye can see in both directions. I’m thinking: “Wouldn’t it be great to gallop a horse along here!” and of course; “Bas would love this!” I'm still missing him heaps... 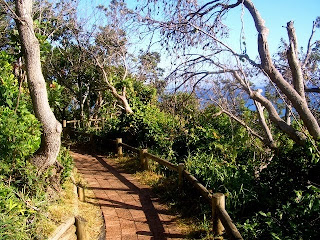 Unlike the murky post-cyclonic snarling swells of the north Queensland road trip, the ocean at Byron Bay glistens like a turquoise jewel. Early morning surfers did their thing with large pods of playful dolphins as healthy joggers with toned and taught bods smiled and said hello as they jogged along the sand.
After taking a bit of time to soak it all in, I went back to the caravan and woke Trent up and suggested a pre-breakfast walk to the lighthouse. 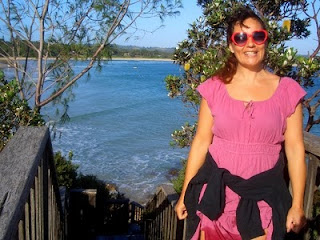 The walk took us along the main beach, up the wooden stairs up the side of the rock that reminded me of Lion Rock at Piha to a lookout. 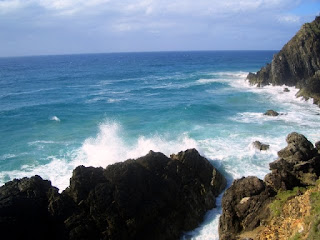 Then we went up and over the hill to the eastern most point lookout where the waves smashed into the rugged black rocks and the blue of the clear sky was the same colour as the crystal clear water. Just beautiful! There it was – that iconic white and blue Byron Bay lighthouse. High up on the hill with its turrets and whitewashed stonework it looks like a castle, like it’s been there forever. I challenge Trent to a guessing game to see if we can work out when it was built. I say 1880, he says 1830. As we get to the top of the very last set of what really are a lot of steps the sea breeze is a welcome relief. At this point I start thinking about breakfast and realise that it’s about an hour and a half in that direction! I notice that the numbers above the impressively large door frame of the lighthouse read “1901”. I choose to see that as a win for me. 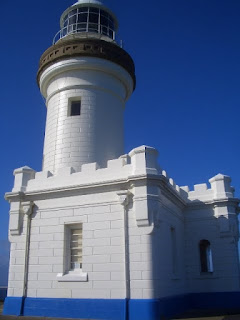 A beautiful day in a beautiful place that I am putting high on my ‘must-visit-this-place-again’ list. And yet another happy caravanning adventure under my belt and even more desire to have more of them...

From Byron Bay the few hours drive home to the Sunshine Coast seemed a breeze. That night I slept soundly in my own bed again and dreamed of long road trips, cute retro caravans and white sandy beaches...