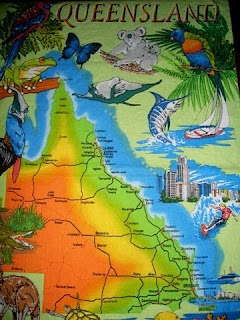 Waking up in a truck stop surrounded by Trucks and bleak bushland couldn’t have been any further from the bliss of waking up to that first sunrise of our trip at Bargara beach.
We awoke to the sounds of trucks moving on and while Bas tucked into a full bacon and eggs truckies breakfast inside, I organised the window repair job with the onsite manager of the truck stop. As rough and gruff as they were, the truckies were all well-meaning enough and not so scary in the light of day and the boss Bill turned out to be quite a saint. With his bunged-up and braced knee he hobbled around the back yard  filled with old signs and a dilapidated old caravan and various other pieces of junk and scrap before finally settling on a brand new piece of ply from inside the storage room at the back of the shop. Having cut it to size, I held the board in place while he screwed it into the framework.

It was at this moment that APN Online called via conference call to interview me for a community editor’s position.
“Is now a good time?” they ask
“Not really”, I say, “Would you mind calling back in half an hour?” with one hand on the ply wood and the other holding the mobile phone. Not a good first impression I am sure! But they did ring back and the interview was going really well, right up until the point that the phone reception cut out and I lost them again. And this time they didn’t ring back. 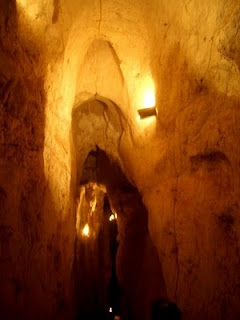 Fuelled up and ready to drive all the way home, and relieved to have only been charged $25 for our emergency window repair, we stopped off for a visit to Capricorn Caves just an hour away on the outskirts of Rockhampton. For $33 for the two of us we were taken on a guided tour of the awesome caves which was well worth the stopover.
I also bought a very kitsch and tacky souvenir T-Towel for the caravan from the gift shop with a map of Queensland on it and marvelled at how much of the map we had actually covered. 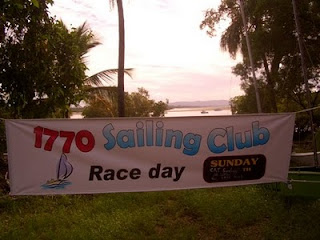 Hitting the Bruce Highway again we headed even further south and just after lunch and yet another petrol stop we detoured off the main drag for a visit to the coastal town of James Cook’s discovery of Australia – The oddly named Town of 1770 and for a quick swim at Agnes Waters beach. Then we just drove and drove and drove from the back road to Bundaberg and on to Harvey Bay, Maryborough and Gympie until finally the road opened up, street lights began to appear and we were home, back on the Sunshine Coast at last. We arrived home in Maleny at around 8.30pm completely exhausted, a little bit stressed and eagerly anticipating the long-awaited sleep-in in our own beds.
So now it’s all over and we are slowly getting used to being home again. Of course, we’re still recovering and it’s still amazing me how much of Queensland we managed to fit into one week, but despite the glitches I think that overall it was a successful trip. It was an adventure with a whole lot of memorable moments and adventures don’t always go to plan. But, hey it’s a story! And after all, what is life for but the creation of stories... 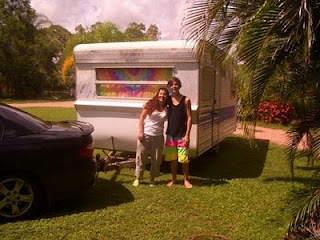 Thanks Bas for being the bestest travel buddy ever! 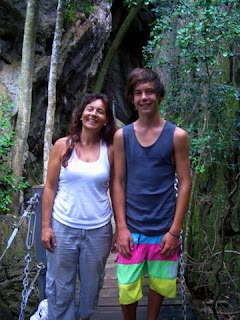