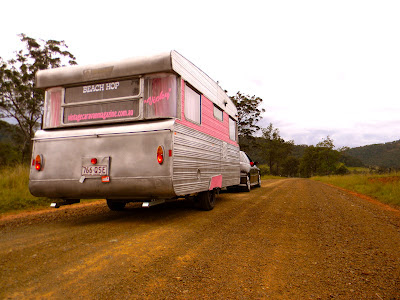 Yeeha! Back on the road after a long time between caravan trips and Vicky is happy, happy happy!
Noddy arrived from New Zealand on Tuesday night.  On Wednesday morning I surprised him by taking him for a cruise in the Cresta and taking part in the Maleny Anzac day Parade.  Once the van was all packed and lots of home baked snacks packed into the car, we set off.
Our first destination was the relatively cruisy journey down the Bruce Highway to Byron Bay – about 260km.  I had phoned ahead to the Glen Villa Resort and booked in and it was great fun surprising hosts Linda and Nigel who had done the Kiwis on Route 66 Tour with Noddy last year who had no idea he was even coming to Australia. 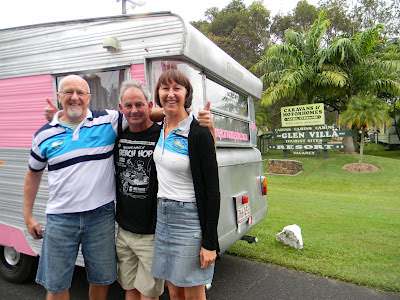 The two days and nights we spent in Byron Bay were heavenly with perfect weather and clear blue skies making for a perfect relaxing wind down before the mega drive part of the journey began.

On Friday we set off south again to Grafton and then veered west towards Glen Innes. Couldn’t believe our eyes when we saw a sign saying “Hanging Rock”… could it be? 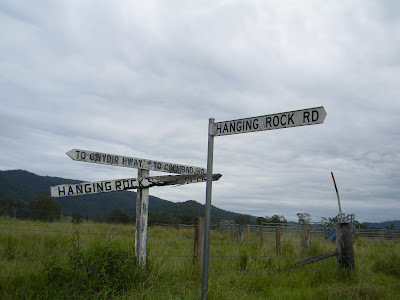 We stopped and asked some road worker guys if this was the very same hanging rock of the Picnic at Hanging Rock movie.  No, they said, but it was pretty nice and well worth the detour down the 12km road to check it out. Had we not heard of the infamous Cangai Siege? They asked.  Apparently some murderer guys dug themselves into a hole to hide out there, they said. But when the cops came they came out with their guns blazing.  They said that you can also camp there, but we had plans to keep going to Tamworth, so we made the detour just for fun.

The next thing you know we’re so off the beaten track it’s not even funny. The narrow winding road turned to gravel and over cattle grids and up and down dale with not a single rock face in sight. We drove over the most rattly low-lying railway sleeper bridge I have ever seen which was hilarious. 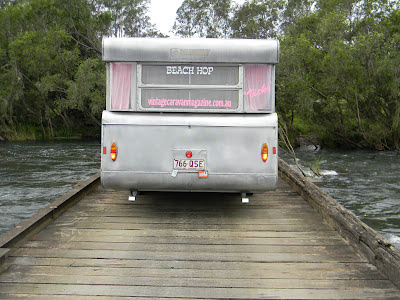 Then we went up over yet another hill and… could that be it? The famed “Hanging Rock"???? 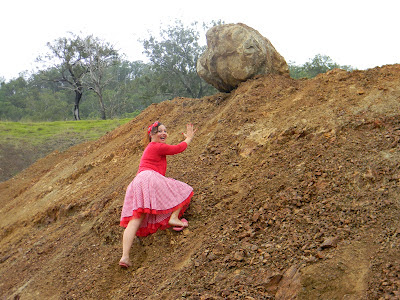 It was an interesting detour that took up a valuable 2 hours of our time and a quarter of a tank of our fuel but we got some great photos of the Mann River and surrounds and it is certainly a beautiful place of the world even if there is no actual hanging rock – that’s just the name of the cattle station. 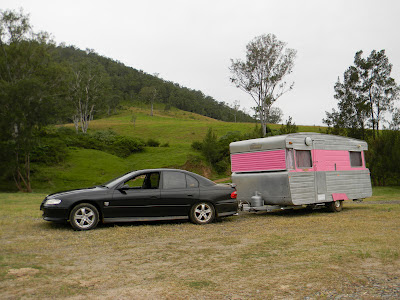 Sometime towards Tamworth I decided that I’d rather keep pushing through to lessen the load on the Saturday drive and get us into the Vintage Caravan Nationals in Cowra and so we drove on past Tamworth (we’ll get he “caravan and the big guitar” shot on the way home) and on towards Muswellbrook. It was here that things went decidedly pear-shaped when the GPS decided that instead of driving on to Muswellbrook, turning right onto a very small sign posted road towards a place called Merriwa was the best route. Not!!!!! Pitch-blackness surrounded us and stretched ahead as far as the eye could see and I had a very bad feeling. Noddy assured me it would be fine and so I drove cautiously on into the blackness. About 20km down and the road turned to the worst, most pot-holed gravel road I have ever driven on deep into the hills and forests. This did not feel good at all! With a speed limit of around 30kph about as fast as this road would allow without a 4 wheel drive and with a caravan in tow, and at this point getting rather weary after 11 hours straight of driving, it was getting hard to see the humour, but somehow we did. Noddy was an awesome co-pilot and if not for his batty jokes and neck massages as I drove, I probably would have cried! 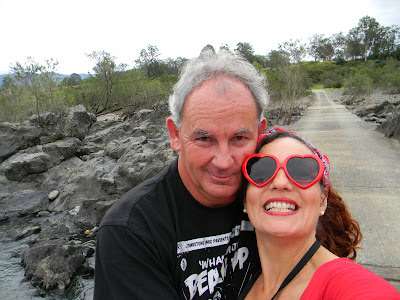 We arrived at Merriwa at around 10pm and found an awesome roadside rest stop that just happened to have unlocked toilets, an electric BBQ and free unsecured Wi-Fi access thanks to the El Dorando Motel across the road! We pulled up here and cooked up the pot of vege soup I had pre-made and fried up some garlic bread on the BBQ before tucking in for the night. 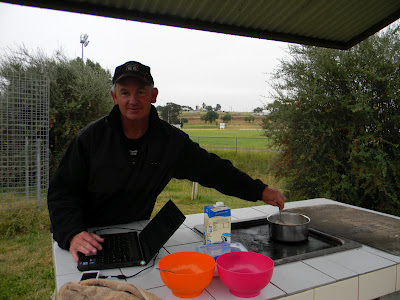 We woke up this morning surrounded by shiny white Jayco Expanda Vans and 4 wheel drives who were setting off on their way to Ayers Rock and the sight of Vicky and the Commodore covered in cow poo and red dust sitting in amongst them had me singing “One of these things is not like the other one, one of these things is not the same….”
Now we’ve had our hot porridge breakfast and had some online time, so now it’s time to drive on to Cowra. Loving the road tripping life and loving having someone so awesome to share it with even more….