This week I've been busy showing my old college roomie from the U.S the sights of my home in the Sunshine Coast Hinterland. Susan has gone back to Vanuatu now for another week before heading home for Oregon, but we had such an awesome time together while she was here. 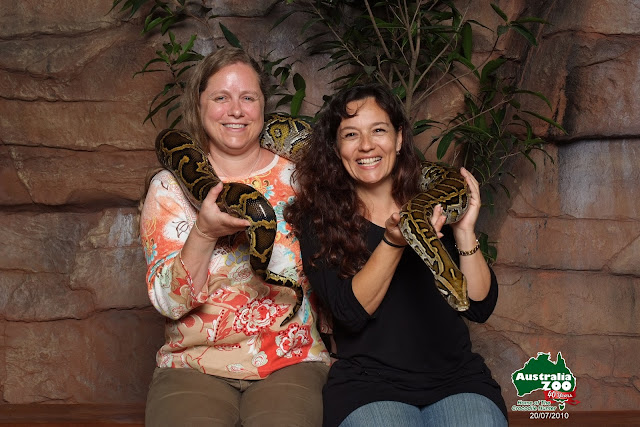 We had a lovely breakfast at the Mary Caincross Cafe overlooking the magical Glasshouse Mountains, checked out the local musos night at the Upfront Club in Maleny, watched the most incredible sunset I have ever seen over the ridges of Maleny and Witta. We then spent the last night in Brisbane at the Mercure Hotel so that Susan could catch her early flight out. 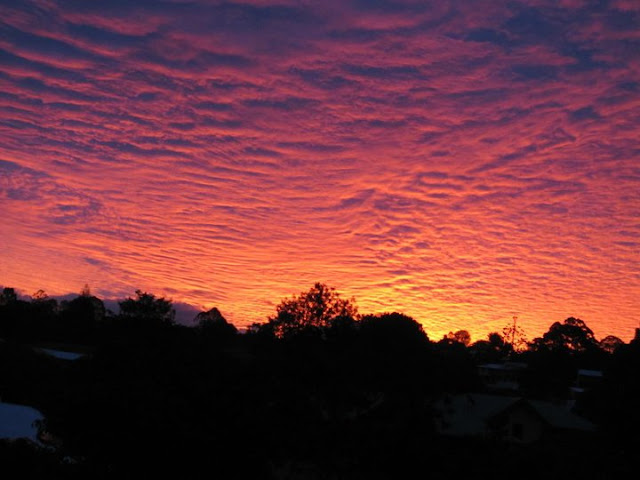 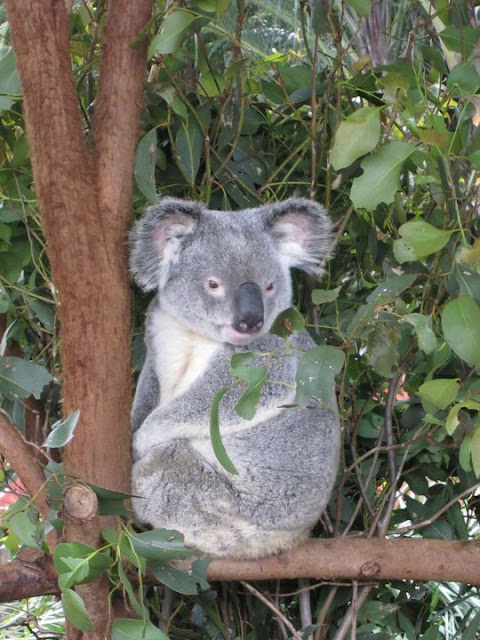 But, the highlight was definitely our trip to Steve Irwin's Australia Zoo where for an extra $20 each, Susan got to cuddle a koala and we got to hold a huge Burmese python named Charlie with gorgous photos to keep. Just a few mintes drive down the hill in Beerwah, Australia Zoo is an amazing place. The staff are all so happy and friendly and are doing a great job of keeping Steve's legacy alive, and with all those gorgeous Aussie critters to care for why wouldn't they be? The experience certainly put smiles on our faces and I can't wait to go back again. 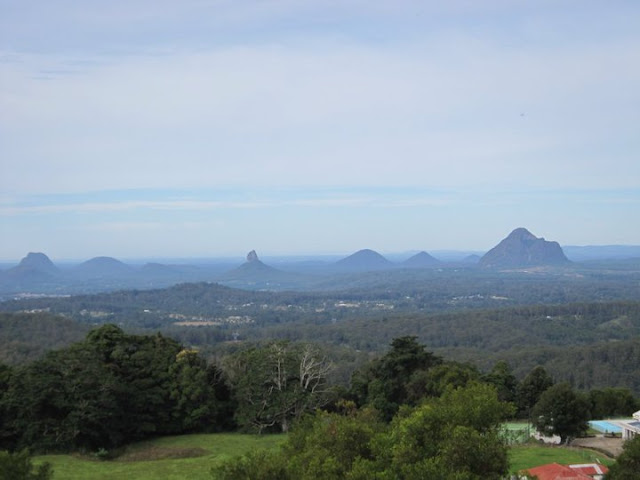 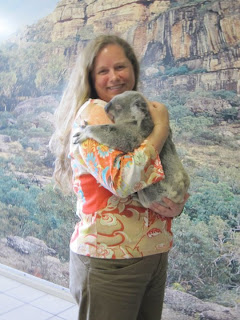 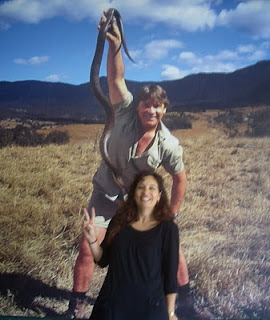 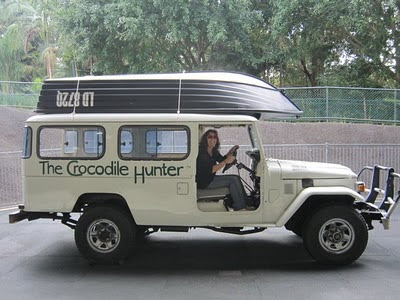 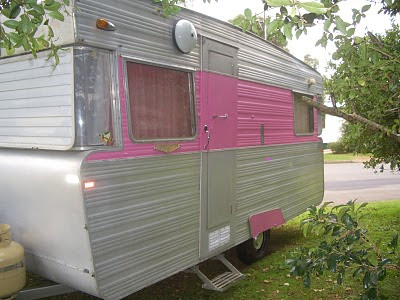 OK so the adventures of Vicky and Lisa have been a little slow lately - what can I say? It's been cold!
I realize now that I am more like a reptile than I thought. I must admit that I am finding it hard to get quite as excited about venturing out as I do when it's sunny and warm outside.
So I'm doing what the guy who wrote my runes book says; "when the fishermen can't fish, they repair nets"
So, what does a caravan nutter do when she's not out caravanning? She buys cans of pink paint of course! Having taken about enough of egg yellow as one girl can possibly handle, it was off with the yellow, and in with the pink! And she now looks sensational!!!! 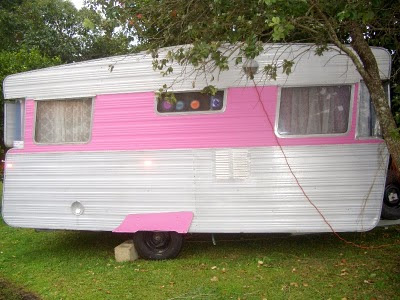 With overseas family members and old college room mates descending upon me over the next month or so, Vicky will be called in for spare bedroom duties for a bit before we take off on any more road trips... 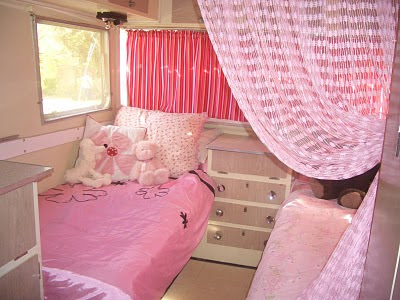 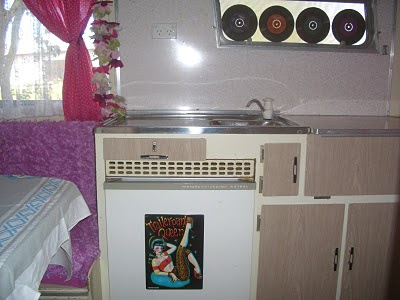 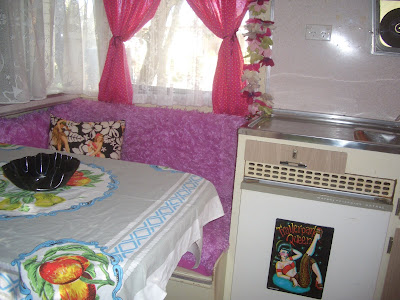 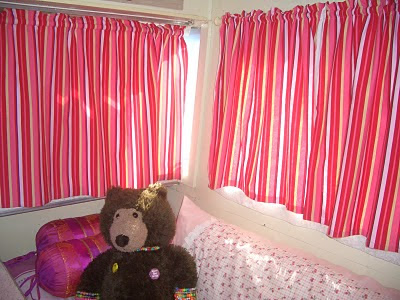 It was red, white and blue all around at the highly successful inaugural Maidenwell Independence Day Hot Rod Round Up last weekend. Hosted by the Nanango-based South Burnett Gas Guzzlers Hot Rod & Customs Club, and organized brilliantly by president Andrew Farrell, the weekend brought out a great turn out of cars and curious onlookers from far and away in a little country town about as far away from the USA as anywhere could be. 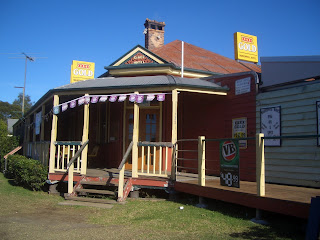 Up near the Bunya Mountains and high up on the country home-style hospitality, Maidenwell really is a one-pub town, and Publican of the traditional Queenslander style Maidenwell Hotel “Spud” and wife Wendy did a great job of coordinating an unusually high number of temporary residents and takers-over of their facilities for the duration of the weekend. 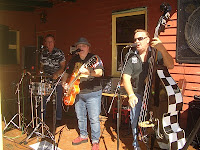 I opted out of Friday night’s festivities and drove out Saturday when the weather cleared into a glorious sunny day and as soon as I got there I was glad I chose the option of taking the caravan and camping onsite. The costs for the weekend including camping were more than reasonable and, apart from the perfect country driving conditions it was well worth it to partake of Saturday night’s most sumptuous pig on the spit feast put on by the Maidenwell Hotel. Later on there was a chance to work it all off by rocking out to the jiving beats of the sunshine coast band Atomic Cruisers. Temperatures dropped to zero overnight and I was greeted by frozen grass when I stepped outside the van the next morning, but the sun shone and the skies couldn’t have been bluer as the chamois came out and the grumbling of even more V8’s slowly brought sleepy heads out of caravans.
By 9am and another fine cooked breakfast thanks to the staff of the 100% old school Hotel, the centre field of the adjoining show grounds was full of two big rows of motoring awesomeness. From rat rods to fully customized classics and muscle cars to traditional rods and original classics, including a late entry with the bands gorgeous old cream-coloured Falcon Station Wagon, were cars of every vintage and era. But scooping the pool in the prizes later in the afternoon’s trophy presentations including Mayor’s Choice, Entrant’s Choice and best Hot Rod Ute/Commercial was Noel’s very smooth and sexy, shiny black KB1 International pick-up truck. 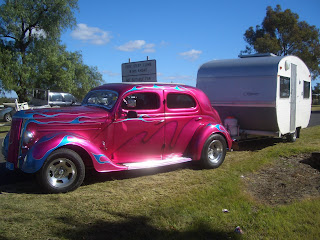 But, of course, being the caravan nut that I am, I was once again drawn to the selection of restored vintage and classic caravans and teardrops in an assortment of candy-coloured paint finishes parked up behind the cars. Yes, I am pretty sure I died and went to heaven that day. Add to that fairy floss, market stalls, a jumping castle for the kiddies, crazy antics involving hot rods, hay bales and golf balls and the Wilko’s Pro-Shine guy making my car sparkle like a Twilight vampire and what more could a girl want? What about the legendary hot-rodding fraternity friendliness, yet another BBQ style cooked lunch up at the hotel, even more rockabilly goodness by the Atomic Cruisers for a Sunday session out on the deck before the long trip home? Yep, I’d say that’s pretty much my idea of a perfect way to spend a weekend! 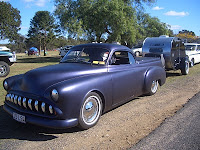 Thanks so much to South Burnett Gas Guzzlers for a great event and to the Maidenwell Hotel Staff for your most bountiful hospitality.
I know where I’ll be celebrating Independence Day next year!