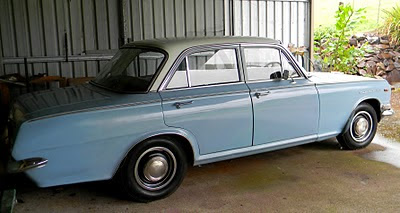 Vicky the caravan now has a new partner. Having had the ad for this cute classic Cresta pinned to my fridge since August last year, my dream finally came true when she was delivered to my house recently. Every time I had opened the fridge I had looked at the photo in the torn out piece of newspaper and said: "She will be mine, oh yes, she will be mine". I watched over the next few months as the price was reduced and then, in early December, the ad stopped appearing and I worried I might have waited too long and missed out. So when it reappeared just before Christmas at an even lower price I took no chances and bought her.
So it's not the EH Holden I had in mind, but I reckon it's the next best thing. It's a Vauxhall Cresta PB built in 1963 and very similar in design to the EJ Holden as it was also made by GMH. But for some reason, the Vauxhall does not seem to have captured the Aussie hearts the way the EJ and EH's have and when I excitedly tell motoring enthusiasts of my new aquisition I get chuckles and other less favourable responses. 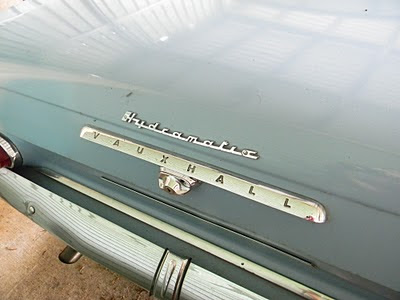 Well, I don't get it. I think she's beautiful and I can't wait to get her restored and, yes, painted pink! At the moment she's in perfect running order, drives like a dream with her very cool "Hydramatic" automatic transmission and comfy bench seats and lots and lots of shining chrome in almost perfect condition.
We are already booked in to make our first appearance at an upcoming clasic car show - not as a show car, but as a vintage van and classic car combo in original condition and I can't wait to get the towbar put on her and take her and Vicky out for their very first photo shoot. 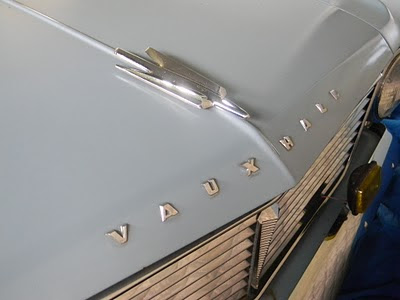 And here's one of the best things about this car; the mascot. Apparently it is off a 1954-55 Velox and has obviously been added by one of the previous owners, but I just love it!  All the chrome on the car is all in great condition and it even has a spare grille and hubcap in the boot!
Despite a severe lack of information on these cars, I have managed to find out that there are only around 50 of these cars still on the road in the UK where they were made, and only a handful left here in Australia, so despite what anyone else might think, I reckon I've scored something really special here and I love her to bits!