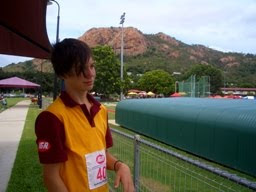 Bas had a great day at State Championships today. He was coming third in Triple Jump right up until the last jump when he was just pipped out by a boy from the Gold Coast and ended up placing a very respectable fourth with a jump of 10.79m. So I am a very proud Mummy today.

Not having to hang around for medal presentations, we opted to hit the road instead of staying the planned extra night in Townsville. Cairns is only 350km from Townsville and Bas was tempted by what he had heard was one of the best night-lit skate parks in Australia. On the way up we had a quick stop-over just outside of Townsville to visit a couple we had met on the Strand on Friday night with their to-die-for fully restored silver 1966 VC Valiant. The beach front Strand in Townsville on a Friday night is like a permanent car show with hot rods, restored classics and muscle cars all lining the street while their owners catch up, show off and share tips. After having stopped to admire the dreamy Val Shane kindly took a look under my car to see what the returning “Clunking” sound was all about. Apparently it was a missing sway bar rubber and was easily fixed and not a safety issue so that was a relief. He said if I picked up the part and brought it out to their place he would fix it for me and I could check out the rest of their classic car collection.

Seeing as they were on the way up north, we decided to take them up on their offer. Shane and Melissa and their new bubby Casey were only too happy to offer us a cold drink and a peek inside their very impressive garage – two more restored Valiants including a 1969 sky blue convertible with white roof and upholstery, a very gorgeous purple 1970 Dodge Charger a couple of projects on the go and still more works in progress around the back. Not bad at all. I took heaps of photos and promised to send them a copy of any articles I use them in. 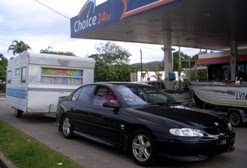 We hit the road again at about 3.30pm and after filling up pretty much drove straight to Cairns. This leg has definitely been the highlight of the whole trip so far. We passed lush mountain ranges and tropical rainforests that reminded me a bit of our part of the world in the Sunshine Coast Hinterland. We’re hoping to pop in to Mission Beach on the way back down but today we just wanted to get here to say that we’d done it!

Well, we arrived here about an hour ago and thanks to our earlier planning and Google maps we soon found the beach front skate park right in the city on the Esplanade. 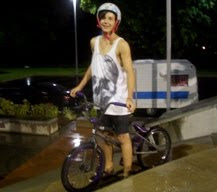 So Bas is out there on the BMX now absolutely loving it. He says he wants to move here and bring all his friends. I have parked the caravan right next to the park and am writing this at the table and lounge of the van. I’ve got the van door open so I can watch Bas as I write and the bright lights of the skate park are providing all the light I need. Our plan is to grab some dinner and head out to palm Cove Caravan Park which is only about half an hour out of town North for a good night’s sleep and for the experience of waking up on a palm lined beach in tropical North Queensland.